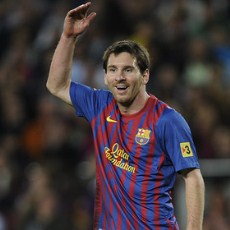 Lionel Messi reached another Barcelona landmark with two more brilliant goals to inspire his side to victory over Racing Santander.

The Argentinian added the finish following a slick one-two with Andres Iniesta to move clear in second on the Catalan club’s list of all-time top goalscorers.

And he rounded off the scoring with a simple finish after Iniesta had produced an outrageous piece of skill and shot against a post.

Messi’s two goals were his 195th and 196th in all competitions for Barca and took him ahead of Laszlo Kubala on the all-time list.

Xavi scored with a rare header in between times as Barca remained one point ahead of Real Madrid at the top of the Primera Division and winless Racing remained in the bottom three.