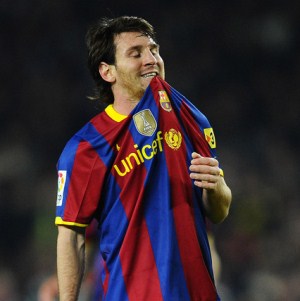 Lionel Messi struck twice as Barcelona overcame an unjust offside decision to beat Villarreal 3-1 at the Nou Camp and move provisionally above fierce rivals Real Madrid – who play Sporting Gijon on Sunday – at the top of the Primera Division table after 11 matches.

David Villa gave the Catalans the lead after 22 minutes and Pedro thought he had made it two shortly afterwards, but saw his effort ruled out by an erroneous offside decision.

Nilmar then levelled for Villarreal as the Nou Camp continued to jeer the officials.

But as he has done so often in the past, Messi came to the Catalans’ rescue with a brilliant goal after 59 minutes and the Argentinian wrapped up the points with a contentious second late on.