Barcelona coach Luis Enrique has admitted that he does not want to lose Pedro. 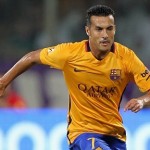 “Pedro is a world-class player. He’s shown how good he is for both club and country. Speaking as a coach, I want him to stay. Nothing has changed. Any changes will be dictated by him,” said Enrique.

“I don’t like looking at ‘what ifs’ especially when they’re on a negative note. I prefer to think that things will carry on as usual. We’re ready to deal with any situation that may arise during the coming season.”

Michael Owen Injury Not As Bad As Feared,Says Sir Alex