Reports are out claiming that Barcelona are believed to be monitoring Everton defender John Stones. 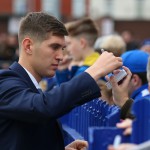 According to The Telegraph, the Catalan giants sent scouts to cast an eye over Stones when England took on Spain in Alicante on Friday.

The 21-year-old England international played no part in the 2-0 defeat but Barcelona will be pleased with the impressive 90-minute showing of the Toffees talent in Tuesday night’s 2-0 win over France at Wembley.

Chelsea are known admirers of Stones, and are believed to be preparing a January bid for his services, while Manchester United are also showing significant interest.

However, Barcelona have now joined the race for there former Barnsley young gun and are planning to continue monitoring the player who was recently named in Gerard Pique’s in an interview with The Telegraph.