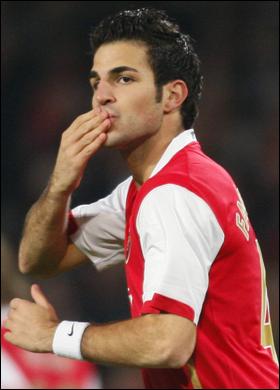 Spanish and European champions FC Barcelona is preparing a bid of £45million to tempt Arsenal into selling midfielder Cesc Fabregas but Barcelona only have six days to complete the deal.

The Spaniards have made the 21-year-old Spain international midfielder their No1 transfer target but must finalise the deal before the Gunners face Celtic in the Champions League play-off first leg on Tuesday.

The Nou Camp side hope to persuade manager Arsene Wenger into selling his captain later this week in order to prevent him from being cup-tied.

Spanish newspapers have reported that Fabregas would be interested in the idea of returning to the club he left in 2003 if Arsenal can be persuaded to let him leave, however Barcelona now face a race against time to complete their audacious swoop and will pull out of the move altogether if the midfielder plays against Celtic.

It is believed that Arsenal will demand the huge fee for Fabregas in an attempt to scare off the Spanish Treble winners, but that has not stopped Barcelona captain Xavi calling for the club to sign his compatriot.


Malouda Wants To Be On Top Form For Chelsea