Reports are out claiming that Barcelona are being linked with San Lorenzo striker Angel Correa. 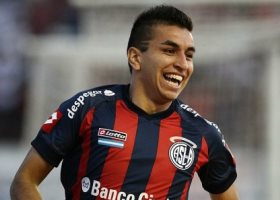 The 18 year old has been likened to Manchester City ace Sergio Aguero and is expected to move to Spain next month.

It is said that Atletico Madrid coach Diego Simeone is a big fan of Correa and hopes to bring him to the Vicente Calderon.