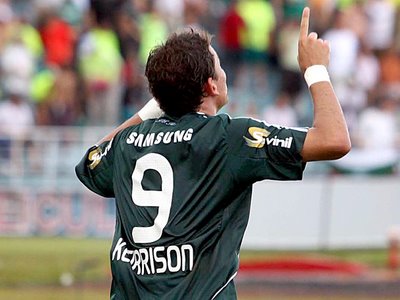 Interesting football news from Spain is out and it has been reported that Barcelona’s new Brazilian striker Keirrison is being sent out to Benfica on loan for next season.

The 20-year-old striker joined the European champions from Palmeiras last week but has been immediately dispatched to the Portuguese club in order to gain experience.

With Zlatan Ibrahimovic having recently joined from Inter Milan, the club also have strikers Thierry Henry, Lionel Messi and Bojan Krkic, all fighting for a place in the starting 11.

Therefore Barcelona believes that Keirrison’s role will likely to be limited in his first season and Benfica have stepped in with an offer of regular first-team football at the Estadio da Luz.

The young striker told local newspapers that he is very happy with the deal and everyone knows that Benfica are a big club. He also added that playing in Portugal will help him make adjustment to European football and it will be easier because of the language and also because of the many Brazilians that play in the team.

He may have a year at Benfica to come but the youngster admits he is already dreaming of playing alongside Ibrahimovic the following season.

He said that he met Ibrahimovic on Tuesday because they were at the same hotel and that he spoke in English and he seemed like a really nice guy. Keirrison also added that Zlatan told him that he will be waiting for him next year and that it would be great to play alongside Zlatan in the future.