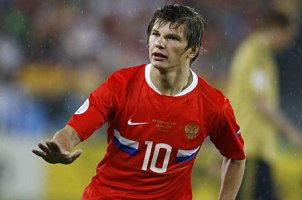 Spanish and European champions FC Barcelona has been reported to have considered reviving their interest in Arsenal midfielder Andrey Arshavin.

Barcelona made a move to Arshavin last January before he agreed a transfer to the Gunners and it is now said that Barcelona remain keen on the Russia international.

Local newspapers have reported that Arshavin is on Barcelona’s agenda should they fail to prise Robinho away from Manchester City in the New Year.