Barcelona To Do Battle With Real Madrid For Rio Ferdinand 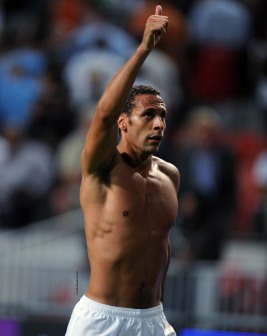 English Premier League champions Manchester United are heading for another Ronaldo-style battle, and this time it will be to hang on to defender Rio Ferdinand.

It is reported that the England international defender is a target for European and Spanish champions FC Barcelona and Real Madrid and knows a move to Spain will boost his growing business career.

Central defender Ferdinand is under contract with United until 2013 but it is believed that United could be tempted to cash in on a player who is 30 and who has suffered from recent injury problems.

It is also said that a move to Spain would give brand Rio the kind of platform both David Beckham and Cristiano Ronaldo have exploited at Madrid and a close source to the player revealed that Rio can see the sense of it.

It was also said that not only would it be a fresh challenge as Rio nears the end of his career, it would also fit all of Rio’s projects off the pitch as Rio has big business plans, which are already taking shape, and would really take off if the player moved to one of the big Spanish clubs.

Ferdinand’s growing portfolio includes running a record label and a football agency and the player is also about to launch a lifestyle management company. Another off-the-field project is #5 Magazine, which uses the latest digital technology.

Elsewhere, the Rio Ferdinand Live The Dream foundation was established last year to give young people from disadvantaged backgrounds the chance to take part in sports, arts and cultural activities.

A launch party in December, costing £495 per head, will feature Prime Minister Gordon Brown as a guest speaker.