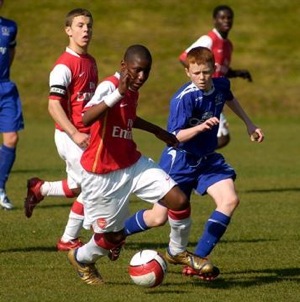 The ‘Young Guns’ website reports that Barcelona have two scouts watching the England U17 striker in action this week and they saw him score two and make two for England as they romped past Kazakhstan, winning 6-2.

It is believed that Barcelona are willing to offer Afobe a massive £5,500-a-week and a place in their reserve-team, Barca Atleti, which is coached by Spanish legend Luis Enrique.

With the likes of Cesc Fabregas and Fran Merida joining them from Barcelona in the past, Arsenal now face the real prospect of having the tables turned on them and losing hot prospect Afobe to the European champs.

I Hired Pepe to Put Curse on Ronaldo – Paris Hilton