It has been reported that Barcelona’s complicated deal for former Arsenal captain Cesc Fabregas has been laid bare. 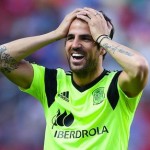 The Telegraph says although Arsenal have so far passed up the opportunity to re-sign Fabregas, they are due around 50 per cent of any profit Barcelona make on the Spaniard.

Fabregas signed for Barcelona in a complicated deal in 2011 through which the Spanish club paid Arsenal an initial £25.4 million, with the player contributing to the Gunners £880,000 each year of his contract.

A further clause that Arsenal would receive £4.4 million if Barcelona win two La Liga titles and one Champions League title over the first five years of Fabregas’s return has not been triggered.

After three seasons back at the Nou Camp, the overall cost of the Fabregas deal so far stands at just over £28 million.