Battle Commences For Nicolas Millan A.K.A “The Next Cristiano Ronaldo” 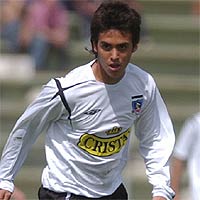 Interesting news are out and it has been reported that Premier League side Everton is facing major Spanish competition for Chilean starlet Nicolas Millan.

While Everton will hand the Colo Colo teenager trials from November 17, local Spanish newspapers have reported that Real Madrid and Barcelona are in talks about bringing the youngster to Spain for tests when he arrives in Europe.

Millan has been likened to Real Madrid star Cristiano Ronaldo and when asked of comparing his ability to that of the Portuguese winger Millan replied that he thinks his playing style is similar to Cristiano Ronaldo as he enjoys using the flanks and going past defenders, and also said that he is particularly good at step overs.


Zidane Is Not Ready For Major Role, Says Florentino Perez