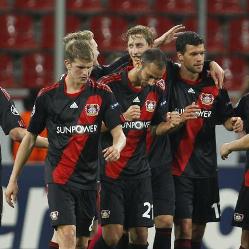 Bayer Leverkusen claimed their first points in this season’s Champions League group stage when Lars Bender and Michael Ballack guided the Bundesliga side to victory in a thrilling game against Genk.

The three points were only sealed in injury-time when former Chelsea midfielder Ballack volleyed home from the edge of the area for his 16th Champions League goal.

Bender had given Leverkusen the lead in the 29th minute when he drilled the ball home from an acute angle but in a pulsating game, both sides created plenty of chances with Marwin Ogunjimi especially threatening for Genk.