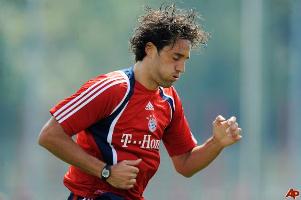 The Hammers have been consistently linked with a move for the former Fiorentina forward and Bayern chairman Rummenigge insists the player will be going nowhere.

He told reporters that Luca Toni’s future is at Bayern Munich.

He added that after his injury, Toni has been training under Louis van Gaal and that he has left a very good impression on the coach.

Rummenigge also said that Toni will soon be re-integrated into the Bayern Munich squad and he will be a fundamental player for the club.