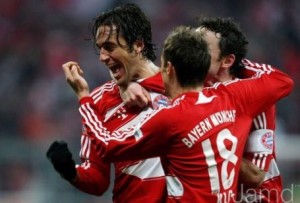 Interesting news from the Bundesliga is out and it has been reported that Bayern Munich and Italian international striker Luca Toni could be on his way back to Italy by joining powerhouse AC Milan.

Local Italian newspapers have reported that AC Milan are exploring the prospect of setting up a loan deal for Toni, similar to their agreement with LA Galaxy for midfielder David Beckham.

WithDutch international striker Klaas-Jan Huntelaar struggling to adapt, Toni would move to Milan on a six-month loan to not only boost the Rossoneri’s attack, but also his World Cup chances.