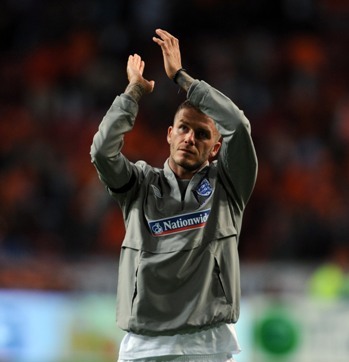 World soccer superstar David Beckham has been given a massive World Cup boost by Fabio Capello.

However the England boss is giving up hope of having Tottenham defender Ledley King in his squad for South Africa.

Capello told reporters that Beckham is always with the England squad because he is an important player and that he is good in the group and is good at every moment in training.

Capello also said that the problem with Ledley King is his knee. Capello also went on to say that England must choose the best players and the fittest because England have taken injured players in the past.

However Capello has also revealed that he is keeping tabs on the recovery of midfielders Owen Hargreaves and Joe Cole from long-term knee injuries.

The Italian added that Manchester United’s doctor said Hargreaves he will be back in two months but he will need to play and the manager is unsure if he will be ready by then.

Capello also said that Joe Cole has said that he would be ready in the next five weeks.

The England boss then said that Cole is one more important player for the England team and he hopes that the player will be ready quickly.