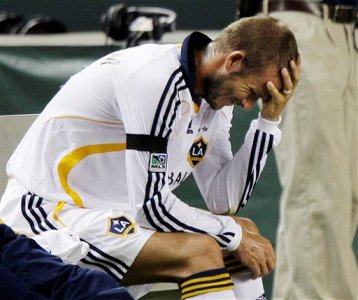 Football superstar David Beckham had to be ushered away by security personnel after he went face to face with fans who provided an ugly reception for his return to the Los Angeles Galaxy home ground for a friendly against AC Milan on Sunday.

David Beckham was playing at home for the first time since he returned to the MLS side after he controversially extended his loan spell with AC Milan into the first half of the Major League Soccer season and it was evident that the fans were unhappy with the superstar.

The former England captain had also seemingly fallen out with his team mates with Galaxy captain Landon Donovan questioning his effort and leadership last season.

Beckham was constantly booed during that match by many in the 27,000 sell out crowd, with some even holding derisive banners saying “go home fraud,” while another read “Hey Becks, here before you, here after you, here despite you.”

The former Real Madrid and Manchester United star was visibly annoyed at the constant booing and had to be escorted away by security as the players left the field at halftime when he walked over to an area of seats to confront jeering fans. Security was tightened in the second half.

However David Beckham managed to calm some of the hostile crowd when he helped set up both of the Galaxy’s goals in the 2-2 draw with the Italian giants.

New signing and Milan defender Thiago Silva was first to put Milan in the score sheet. Beckham then replied by providing a field-length cross to Landon Donovan, who set up Alan Gordon for the equaliser in the 29th minute.

Veteran striker Filippo Inzaghi put the Milan ahead again in the 61st minute only for Bryan Jordan to connect on a Beckham corner in the 65th minute and equalise at 2-2.

After assisting with the second goal, David Beckham turned in the direction of the stadium that had been the most vitriolic and simply shrugged his shoulders. He was substituted with 15 minutes left to play.

Chelsea Will Not Lodge Official Complaint Against Manchester City,Yet