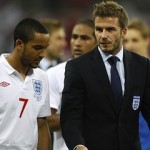 David Beckham might not be in the England squad but he is still has a major part to play off field for England, Theo Walcott is one such player who is reaping the benefits of having Becks has his mentor.

Walcott said yesterday: ‘He has always told me to deliver the ball into the space and if there is noone there, it is not your problem.
‘You just need to put the ball in the space and someone should get on the end of it. That’s what he’s done. He’s a fantastic crosser and having him there can only help. You look at someone who has won so many things and it makes you want to get the best out of yourself.’
Walcott, who idolised Beckham as a young player and was thrilled to pull on the England No 7 shirt against Mexico on Monday, added: ‘It’s a shame his injuries mean he won’t have a chance to play in a last World Cup and he is a big miss but just having him around can only help us.’

There is the electric pace of Walcott and Aaron Lennon, the trickery of Adam Johnson and Shaun Wright-Phillips, the industry of James Milner and the adapted talents of Joe Cole and Steven Gerrard.
Capello boasts another weapon in Beckham, arguably the world’s finest crosser of a football during the last 15 years. Beckham will fly out with the squad on Wednesday and stay in the team hotel near Rustenburg.
He will be considered a permanent member of England’s backroom staff and will help those striving to swing crosses on to the heads of Wayne Rooney and Peter Crouch.