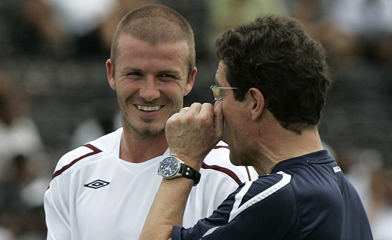 England manager Fabio Capello has revealed that soccer sensation David Beckham must return to Europe for the second half of next season in order to have any hope of playing at the World Cup for the England national team.

Capello told reporters that David Beckham knows very well that if he doesn’t return to a big European championship in December he will have no chance for playing at the World Cup in South Africa.

The 34-year-old Los Angeles Galaxy midfielder won back his England place during a loan stint at Italian side AC Milan in the second half of last term.

However the LA Galaxy fans did not respond well to Beckham’s loan move to Milan and Beckham has been a constant target for abuse by his own fans.

Beckham was also involved with a couple of confrontations with fans who booed him during LA Galaxy’s matches.