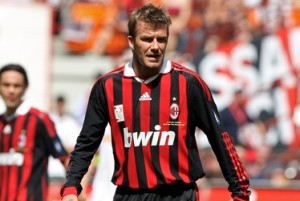 England international midfielder David Beckham has been said to be 95 per cent sure of his second loan move to AC Milan will happen.

The 35-year old midfielder made a big impact coming on as a substitute in England’s final World Cup qualifier against Belarus on Wednesday night.

Beckham told reporters after the match that he was close to a move to the San Siro.

Beckham did insist, however, that his move to Milan does not necessarily mean he will be a certain inclusion in Fabio Capello’s World Cup squad.

He said that the players all will have to prove that they want to be in the squad and in the team for every game, for every qualifier and every friendly.

He then said that every one of these players are so hungry and wants to be out there.

Beckham ended by saying that the move to AC Milan is close and is almost 95 per cent done.