Bellamy No Longer Under Police Investigation 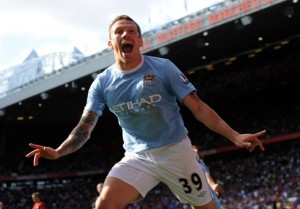 Manchester City’s Craig Bellamy’s is no longer under investigation by the police following his clash with a fan who ran on to the pitch at the Manchester derby on Sunday.

The supporter was pushed in the face by Bellamy, who confronted him after he staged a solo pitch invasion towards the end of Manchester City’s 4-3 defeat at Old Trafford.

Neither the fan nor the Wales international winger made a complaint to police about the clash but the supporter will appear in court later this month over the pitch encroachment.

A Greater Manchester Police spokesman said that the police have received no complaints about this incident and are currently not investigating the matter.