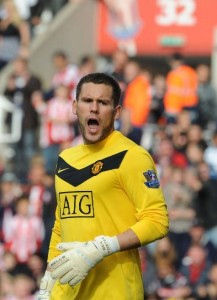 Interesting news are out and t has been reported that Manchester United goalkeeper Ben Foster has been hit by a mystery injury.

It is a wide known fact that Foster was not included in the England squad for the World Cup qualifiers with Ukraine in Kiev next Saturday and Belarus at Wembley four days later.

The Football Association has stated that the Manchester United goalkeeper was injured but did not clarify the nature of the problem, despite having done so in the case of Jermain Defoe, who is out with a broken finger.

In Saturday’s 2-2 draw with Sunderland it appeared that Foster’s confidence had sustained the main damage. Foster was overwhelmed when Sunderland striker Kenwyne Jones headed in the second goal.

This was not a random lapse by the 26-year-old and Manchester United manager, Sir Alex Ferguson, made no mention of an injury after a game in which Foster received no treatment.

England Squad For World Cup Qualifiers Against Ukraine And Belarus