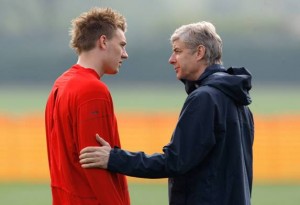 Arsenal striker Nicklas Bendtner has revealed that he has asked boss Arsene Wenger as to why does he keeps being played on the flanks.

Wenger has used a 4-3-3 system this season with Robin van Persie employed as the main striker, meaning Bendtner has usually been pushed wide when selected.

However, the Denmark international, now age 21, feels that his Champions League goal against Standard Liege shows why he should be playing centrally and added that he thinks that this is a short-term decision as he have spoken to the manager and that Wenger gave an explanation.

Bendtner added that Wenger knows well that his position is to play up front as a striker and that it is where he prefers but added that he is willing to play anywhere on the pitch for the team.

Bendtner, whose goal against Liege sparked Arsenal’s comeback from two goals down, added that he would like to think the reason he scored against Standard Liege has something to do with the fact that he played more centrally.