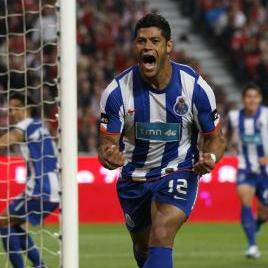 Porto scored three goals in 10 minutes to beat Benfica 3-1 in a thrilling Portuguese Cup semi-final second leg on Wednesday to book a place in the final on away goals with a 3-3 aggregate score.

Benfica had won the first leg 2-0 away at the Dragao Stadium in February but Wednesday’s result condemned them to a second defeat this month by Porto, who also beat them at the Luz Stadium to clinch the league title.

The first half on Wednesday was a tame affair with only one chance apiece — a shot sent just wide for Benfica by Oscar Cardozo and an effort by Porto’s Colombia striker Radamel Falcao that keeper Julio Cesar blocked.

But the game burst into life in a high-tempo second half when Porto’s Joao Moutinho opened the scoring with a low diagonal drive in the 64th minute.

Falcao gave holders Porto the away goal advantage in the 74th minute when his shot was deflected in by Benfica midfielder Javi Garcia to wrongfoot Cesar.

Cardozo gave Benfica some hope in the 80th minute by converting a penalty, but Porto held on to secure another memorable triumph at their rivals’ ground.

Porto will meet Vitoria Guimaraes at the final on May 22.