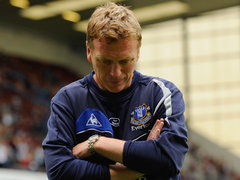 A depleted Everton side were crushed 5-0 by Benfica in their Europa League match at the Estadio da Luz.

Benfica took the game by the scruff of the neck in the second half with four goals, three of them in the space of five minutes.

Javier Saviola and Oscar Cardozo both scored a brace with Luisao also on target against an Everton side missing 11 players.

Hyypia Reveals He Has No Regrets Leaving Liverpool


Lampard Believes Manchester City Can Do A Chelsea