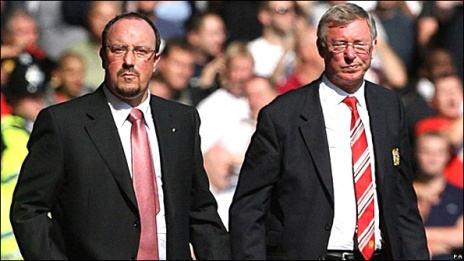 Manchester City has been busy in the transfer market and has signed striker Carlos Tevez from Old Trafford during the close-season and also landed Emmanuel Adebayor and Kolo Toure from Arsenal as the club’s Abu Dhabi-based owners handed Mark Hughes a massive transfer warchest.

Ferguson was infuriated when City erected a billboard in Manchester city centre with a picture of Tevez above the slogan “Welcome to Manchester” and has been quick to dismiss the threat posed by United’s local rivals.

However Benitez strongly believes that Sir Alex Ferguson is worried about the threat City could pose this season.

Benitez said that we can always talk about the top four, but Manchester City are doing a very good job and have bought some excellent players and said that he can understand why Mr Ferguson at Manchester United is a little bit worried.