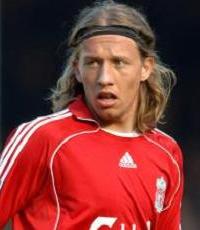 Benitez believes Lucas has been the club’s most impressive player during pre-season and the 22-year-old underlined that with a goal and an eye-catching display in Saturday’s 2-1 home friendly defeat to Atletico Madrid.

The Spaniard is aware the more adventurous Alberto Aquilani, bought from Roma for £20m last Friday, is not yet ready to replace Alonso in midfield, paving the way for Lucas to make his mark.

Benitez told reporters that Aquilani will need time abd that he knew Aquilani would be out for one month or so when he was bought from AS Roma. Benitez also said that he analysed the squad and thinks that with Javier Mascherano, Lucas, Steven Gerrard and Damien Plessis Liverpool have enough strength in depth.

Benitez also said that it is a great chance for Lucas to win over the Anfield fans, who dished out plenty of criticism last season.

Lucas also said that he is always ready and now that Xabi is gone, he hopes that there will be more opportunities for him in the Liverpool squad.

He also said that he is working hard in training and trying to earn a position in the team. Lucas said that he is feeling better and hopefully it will be a good season for him.