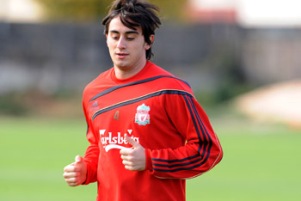 Liverpool manager Rafael Benitez has revealed that he was happy with the debut of summer signing Alberto Aquilani in Wednesday night’s 2-1 Carling Cup loss to Arsenal.

The former AS Roma midfielder came on in the 76th minute of the contest after missing the beginning of the season with an ankle injury and Benitez was pleased with his efforts.

Benitea told reporters that there were a lot of players showing passion, character and quality on the pitch, and Aquilani was one of those player.

Benitez also added that Aquilani has the quality, but he needs to improve his match-fitness.

Benitez added that Aquilani can pass the ball in the final third and that he can make a big difference.

Benitez also said that Aquilani has to improve his match fitness and that he is getting closer to full fitness every day and that it is a matter of time.

Benitez also said that Liverpool want to push him, but he cannot be push too hard as Liverpool knows that will be a risk.

The manager also said that Aquilani will have to keep going, keep working and add more minutes every game.