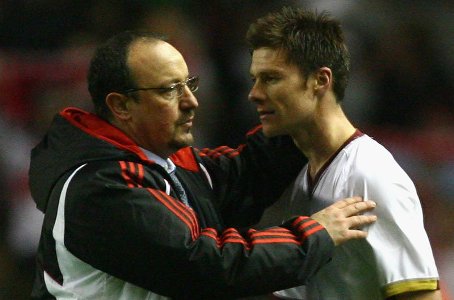 It has been revealed that Liverpool boss Rafael Benitez has urged his Spanish midfielder Xabi Alonso to stay with Liverpool as he continues to be linked with a move to Spanish giants Real Madrid.

The Spain international has already suggested that he is flattered by the interest from the Spanish giants and would consider a move back to La Liga but Benitez has made it clear that he wants to keep his star player and is desperate for the 27-year-old to remain at Anfield.

Just 12 months ago Alonso was very much available for transfer as Benitez looked to bring in Gareth Barry but with the former Aston Villa midfielder now at Manchester City, there is no suggestion Liverpool are ready to entertain any bids for Xabi Alonso.

However, Real Madrid is relentless in their pursuit for the player and show no sign of abandoning their goal and with the player clearly suggesting he would be willing to start talks it will be difficult for the Reds to hold off the Spanish side and their new-found wealth.

Benitez said that he had talked to Xabi on Friday and told him that that the fans love him and that maybe he should just stay.

Benitez also added that Xabi is good player and that he will be really pleased if Xabi decides to stays. Benitez also said that all the players and his team-mates want Xabi to stay.

It will be a great news for Liverpool if Xabi decides to stay as they came so close to winning the Premier League title last season.