Benzema Delighted With Double Against Tenerife 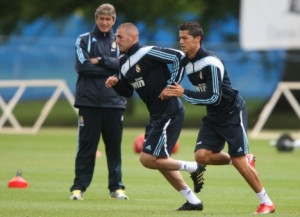 Benzema added that the first goal against Xerez was important for him, but double means even more so as it has helped the team win.

The former Lyon striker added that it is always a pleasure to score at the Bernabeu. Benzema said that the first-half was very difficult but it was mush better in the second half.

The French international striker added that he never had any trust issues and that he will have the same confidence for the next game.

Benzema also said that he always has a lot of security, like the team and that he is getting better all the time. He also said that the rotations are normal and goes well for the team.

Bezema however added that there is competition in the squad, but the point is that every time he gets the chance to play, he will make a difference and he is very happy for this.


Vidic Is Happy With The Form Of Ben Foster