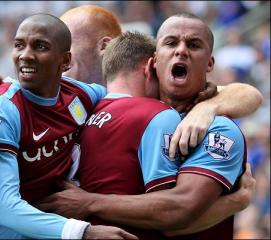 Agbonlahor struck with six minutes remaining to lift Martin O’Neill’s side into sixth place in the Premier League.

Eventhough Birmingham had dominated for much of the second half, they failed to create anything of note to trouble Villa keeper Brad Friedel and they paid for their lacklustre display in front of goal, with Agbonlahor nodding home from close range to secure the local bragging rights.

The goal settled a full-blooded game of few chances, but did set up a frantic finish in which both sides could have scored.

Birmingham pressed forward for an equaliser, with keeper Joe Hart even charging up for an injury time corner.

And both Agbonlahor and John Carew could have netted again on the break, only to fluff their respective one-on-one chances.