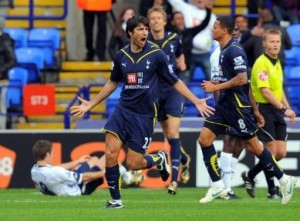 Tottenham Hotspur’s Croatian connection earned them a 2-2 draw against Bolton Wanderers in a pulsating match at the Reebok Stadium.

Twice the home side led, through Ricardo Gardner and Kevin Davies, but Spurs drew level with goals from Niko Kranjcar (pictured) and Vedran Corluka.

Although they failed to record their first home win of this Premier League campaign, Bolton played with enough energy and invention to suggest avoiding relegation should not pose a problem.