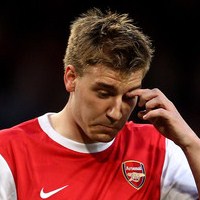 The Times has reported that the newly crowned German champions are prepared to pay £11million for the Danish interntaional and will really go after him if Paraguayan forward Lucas Barrios happens to depart.

The 23 year old’s father and agent has already stated that Dortmund are keen on his son, lending some truth to the speculation.

He told Sporten.dk : “There is interest from several German clubs. I can confirm that Borussia Dortmund would like to buy,”.

“Unfortunately I cannot comment on whether there have been any negotiations between Dortmund and Nicklas or Dortmund and Arsenal.”