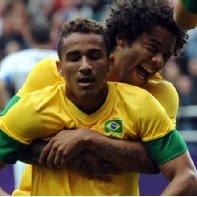 Internacional striker Leandro Damiao inspired 10-man Brazil to comfortable Group C victory over New Zealand to send them into the quarter-finals with a 100% record.

The 23-year-old set up midfielder Danilo to open the scoring and then claimed his second of the tournament before the break, with Tottenham’s Sandro adding a third in the second half to cement the win which will see his side return to St James’ Park on Saturday evening.

Brazil went ahead with 23 minutes gone when Danilo played a one-two with Damiao before surging into the box and lifting the ball over keeper Michael O’Keeffe.

The South Americans were simply irresistible, and they extended their lead within six minutes when Alex Sandro ran on to an audacious back-heel by left-back Marcelo and squared for Damiao to tap home.

Sandro put the result beyond doubt within seven minutes of the restart when, after substitute Tim Myers had been penalised for a foul on Damiao, Marcelo curled the resulting free-kick to the far post for the Spurs midfielder to fire home.

Neymar should have made it 4-0 within two minutes, only to sky over an empty goal from Rafael de Silva’s cross, but Alex Sandro’s afternoon took a turn for the worse 15 minutes from time when, having been booked earlier for a foul, he was yellow carded for a second time for diving.