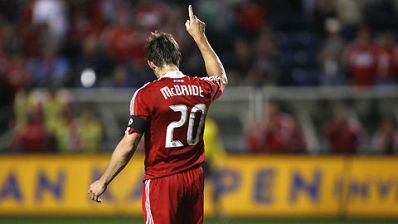 Great news for all Chicago Fire fans as striker Brian McBride is on the verge of a return from injury.

The former Fulham striker underwent surgery on his shoulder back in July and is now back in full training with the Fire and close to a return according to coach Denis Hamlett.

Fire coach Denis Hamlett said Wednesday that McBride is looking good after the injury but the is still being cautious, and working on his fitness and getting his soccer sharpness back.

The coach also added that there is a chance that McBride would be available to play this weekend against Real Salt Lake.

Hamlett also said that McBride’s presence would change the dynamic of the whole playing group and that it is huge to have him back.

He also added that it is great to have a player back from injury from the original group, who the club did not expect until later this month.