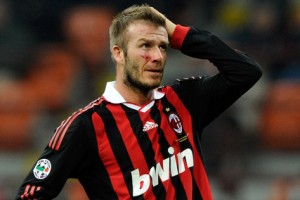 LA Galaxy coach Bruce Arena is confident that superstar midfielder David Beckham will play for the club this coming season.

Arena told reporters that David Beckham remains a key figure for MLS after he suffered a season-ending injury for AC Milan on Sunday.

Arena released a statement on the team’s website stating that :”We will give David our complete support to make sure that he is able to get himself back to full health before he returns to the field,” .

“David remains an important player for the Galaxy and we look forward to welcoming him back to the club and assisting him in his recovery.”

Beckham suffered the injury during AC Milan’s 1-0 victory over Chievo Verona in a Serie A match on Sunday at the San Siro, dooming Beckham’s dream of playing in the 2010 World Cup at South Africa in June.

Arena also said :”Injuries are an unfortunate part of our game and they are even more disappointing when they happen to a player who was so close to realizing his dream of representing his nation at this summer’s World Cup,”


Clint Dempsey : Great To Be Back In Action