Bruce Arena : Landon Donovan Will Be Back With The LA Galaxy 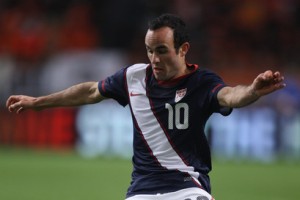 Donovan is due to return to parent club Los Angeles Galaxy, where he recently signed a new contract, to prepare for the new Major League Soccer season later this month.

Moyes has previously stated that any extension to the 10-week loan would be unlikely, but he has now made contact with Galaxy to see if it is possible.

Moyes told reporters that he is keen to keep Landon Donovan and it sounds initially in America that they might say yes.

He also said that Donovan is keen to stay with Everton so it looks as though all parties are keen.

Moyes however said that it has not been confirmed yet and that he cannot say exactly if that is going to happen.

However Galaxy coach Bruce Arena said today that the LA Galaxy are not interested in Everton’s proposal and that Landon Donovan will be back on 15 March.

Michael Owen Ruled Out For The Rest Of The Season


Mesut Ozil : I Dream Of Playing For FC Barcelona