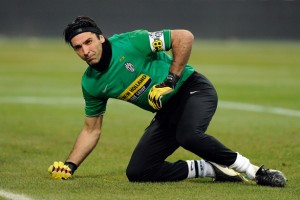 Interesting news are out and it has been reported that Juventus could seek to cash in on goalkeeper Gianluigi Buffon if they fail to qualify for next season’s Champions League.

Local newspapers have reported that Juventus would struggle to cover their wage bill without money from the Champions League next season and Buffon could be sacrificed.

It was also reported that German giants Bayern Munich are keen on the Italy No1, while he has also been linked with Premier League club Manchester City.

Along with Buffon, Juventus would also seek a buyer for Felipe Melo if a top four place is not secured this season.