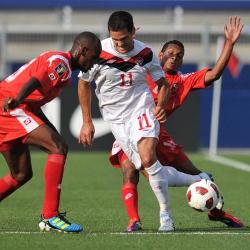 Panama secured top spot in Group C of the CONCACAF Gold Cup on Tuesday after an injury time equaliser by Luis Tejada gave them a 1-1 draw against Canada.

Canada were moments away from securing passage to the quarter-finals with a second win but the equaliser from Luis Tejada means they are facing an exit unless the United States lose to Guadeloupe later on Tuesday.

The Canadians took the lead with a Dwayne De Rosario penalty in the 62nd minute after the midfielder was ruled to have been brought down by Eybir Bonaga.

But from a corner in the final moments, the ball bounced around the box, striking the cross bar and was eventually scrambled over the line by Tejada.

Panama top the group with seven points, Canada have four while the United States, who lost to Panama on Saturday, have three points. Guadeloupe are without a point.