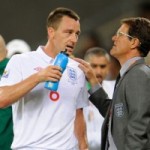 Sensational news are out and it has been reported that Chelsea captain John Terry has seen plans of a clear-the-air England meeting blocked by coach Fabio Capello.

Although there has been no official statement on the discussion Terry was expecting to have in a pre-planned team gathering, reports have emerged suggesting Capello squashed the idea flat.

Rather than listening to what Terry had to say, let alone acting on his grievances, it is claimed the revolt was headed off before it even got underway, on the advice of senior figures surrounding the England camp who feared Terry was not speaking for the whole team and Capello was in no mood to listen anyway.

If true, it would leave a group of senior England players – Wayne Rooney, Steven Gerrard, Frank Lampard, David James, Jamie Carragher, Glen Johnson, Aaron Lennon and Peter Crouch – who initially got their problems out into the open over a beer after the Algeria debacle, in an uncomfortable position given Terry named them ahead of an intention to speak, which he indicated he was willing to go through with no matter what the consequences.

“We are in a meeting with the manager, whether he starts it or finishes it, the players can say how they feel and if it upsets him then I’m on the verge of just saying: ‘you know what? so what? I’m here to win it for England’,” he said.

“If we can’t be honest with each other there is no point being here.

“It has worked in the past at Chelsea. We have a responsibility to ourselves, the manager and everyone else to voice an opinion and hope he takes it on board.”