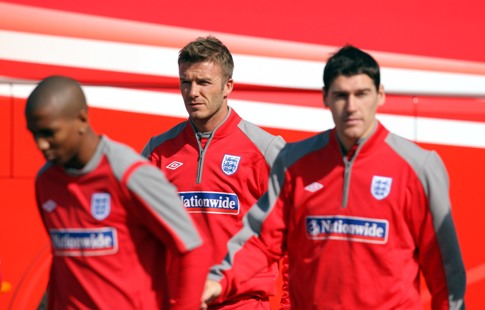 World football superstar David Beckham has hailed manager Fabio Capello for turning England into a nation of believers as the Three Lions are on the verge of clinching a place in next summer’s World Cup after winning EVERY qualifying match so far.

With a perfect record of seven wins out of seven matches, Capello’s men are expected to seal their spot in South Africa against Croatia on Wednesday and that is in stark contrast to the last time England played Croatia at Wembley, when they missed out on Euro 2008.

The embarassing nature of the 3-2 defeat saw the end of Steve McClaren’s reign as coach and the appointment of Capello.

Midfielder Beckham, age 34, reckons the Italian manager deserves huge credit for the turnaround and said that Fabio Capello has brought into squad and the nation is a sense of belief.

Beckham also added that after the last qualification campaign and when England did not qualify, the belief and trust was lost from the fans and that caused a great deal of hurt towards the players.

However, Beckham said that this qualification campaign has brought belief back into fans and the players and that is what the England squad needed to get back.

Beckham also went on to say that the players needed to get back to playing the football that they know they could play but the players also needed the belief of the fans.