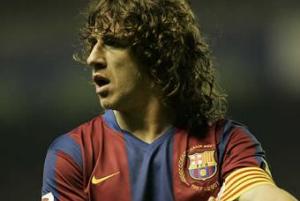 Great news for all Barcelona fans as captain Carles Puyol has agreed a contract extension until 2013 with the European champions.

The 31-year-old Spanish international’s current deal was due to expire next June.

It is said that Puyol, who sat out the Catalan giants’ shock 2-1 home defeat to Russian minnows Rubin Kazan in the Champions League on Tuesday, will sign the new agreement in the coming days.

Barcelona team-mate Xavi Hernandez told reporters that Puyol has been with Barcelona for many years and is the heart and soul of the dressing room and for that reason, it is fantastic news.

Puyol joined the club’s youth system in 1995 and made his first team debut on October 2, 1999 against Real Valladolid.

The shaggy-haired defender has gone on to make 451 appearances for Barca, the fourth highest for the club, helping them to win three Liga titles, two Champions League titles and a Copa del Rey.

Barca, top of La Liga on 19 points from seven matches, welcome Real Zaragoza to the Camp Nou on Sunday