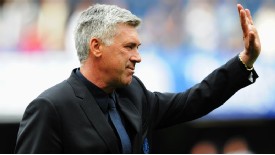 Chelsea sacked Carlo Ancelotti after finishing the campaign without a trophy.
The Italian left his post less than two hours after this afternoon’s final Barclays Premier League game of the season at Everton, which the Blues lost 1-0.

“Chelsea Football Club can confirm that Carlo Ancelotti parted company with the club today,” Chelsea said in a statement.
“The owner and board would like to thank Carlo for his contribution and achievements since taking over as manager in July 2009, which included winning the Double for the first time in the club’s history.”

Ancelotti was under serious pressure from owner Roman Abramovich, despite winning the Double in his debut season.
Chelsea will now start the search for a new manager with Marco van Basten and Guus Hiddink among the contenders.

I Don’t Need To Prove Anything At Chelsea – David Luiz