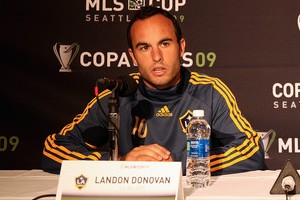 Interesting news are out and it has been reported that Premier League giants Chelsea are eyeing Everton winger Landon Donovan.

It is said that Chelsea boss Carlo Ancelotti sees the on-loan LA Galaxy captain as a replacement for Joe Cole.

It was also said that Ancelotti has been so impressed with the Los Angeles Galaxy forward during his loan spell with Everton, that he has asked club chiefs to open talks with Major League Soccer chiefs about a permanent transfer.

Donovan, now age 28, is due to return to LA for the start of the MLS season after today’s Premier League clash with Hull although Everton boss David Moyes hopes to extend the loan deal.