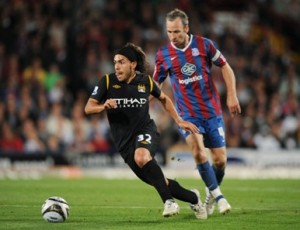 Argentinian international striker Carlos Tevez has insisted that he has nothing to fear from fans if he makes an explosive return to Old Trafford on Sunday.

The former Manchester United striker is back in light training at Manchester City and hopes to recover from a knee injury in time for the crucial derby at United.

However, striker Tevez, now age 25, expects a positive reception from the crowd despite walking out on United this summer to join their bitter rivals.

In reality, Tevez will have every touch jeered by the fans who once idolised him. However the striker said that he expects to get a good reception from the fans.

Tevez added that he always gave his best at United and the fans know that he did everything to try to score and help the team win.

Tevez also said that he does not see any reason why he should get a bad reception from the fans.

Emmanuel Adebayor ran the length of the pitch to celebrate his City goal against his former club Arsenal last week and said that if he scores against United he would be glad but he doesn’t think too much about it.

He added that he will be happy even if he doesn’t score but as long as Manchester City wins.