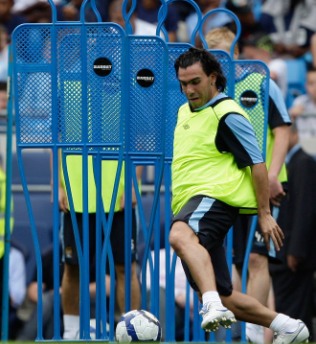 Manchester City striker Carlos Tevez has been ruled out of Saturday’s Premier League clash against Arsenal and could also miss his reunion with former club Manchester United.

According to City manager Mark Hughes, Carlos Tevez suffered a knee injury during international duty with Argentina last weekend and could be sidelined for two to three weeks.

However, it is believed that the 25-year-old is desperate to play against Manchester United, who he quit to join City in the close-season, but it looks unlikely he will recover in time for the match at Old Trafford on September 20.

Meanwhile, Manchester City will wait for the results of scans on Robinho’s ankle injury before deciding whether the Brazilian will play against Arsenal.

Hughes said that Robinho had a little bit of swelling on the ankle but he does not think that there is a significant injury however he added that it is best to check to make sure there is no stress fracture.

Hughes said that once he gets the results, only then he can decide whether Robinho plays on Saturday or not.