Casillas Defends Jose Mourinho : I Stand By My Coach! 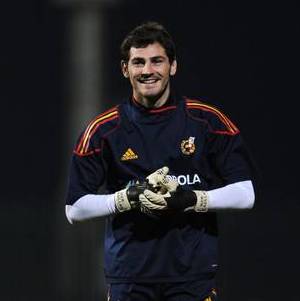 Iker Casillas has voiced out in defence of manager Jose Mourinho after a pre-match war of words lead to a hostile clash in Sporting Gijon.

Real Madrid won the match 1-0 courtesy of a Gonzalo Higuain strike to go top on the Spanish Primera Liga.

The Portuguese tactician had been heavily criticised by Gijon boss Manolo Preciado in the build-up to the game due to comments the Real coach made earlier in the season.

The Portuguese criticised Gijon for the side they fielded against Barcelona, with Preciado suggesting last week that had Mourinho still have been coaching in England, his comments would have seen him “thrown in jail.”

Casillas said : “The game was complicated for many reasons, such as the comments made before the match, the atmosphere at the stadium,”.

“We stepped up to the challenge and earned three vital points. In all fairness the atmosphere was hostile. The home crowd supported its team 100%, which is normal.

“We responded well to that. Regarding what was said, I limit myself to defending my coach. I respect other opinions, but I do not share them. I stand by my coach, who is the best.”

The win at Gijon continues Madrid’s fine unbeaten start under Mourinho, with 13 victories in 17 games in all competitions.