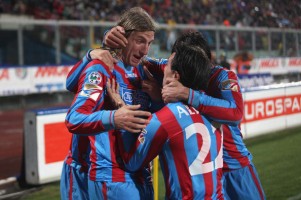 Catania threw the Serie A title race open and took a giant step towards securing their own future in the top flight by beating 10-man Inter Milan on Friday night.

Diego Milito put the Nerazzurri in front in the 54th minute, but Catania refused to accept defeat and Maxi Lopez equalised 20 minutes later.

Sulley Muntari was sent off after only two minutes on the field as he gave away a penalty which was converted by Giuseppe Mascara in the 81st minute.

And Jorge Martinez sealed a deserved and important win for the Rosazzurri in the last minute as Inter showed weaknesses ahead of their trip to Chelsea in the Champions League next week.

Their lead at the top of the table could be cut to just one point if AC Milan beat Chievo on Sunday night while Catania move eight points clear of the bottom three.