It has been reported that Celtic boss Ronny Deila is delighted with their loan deal for Manchester United defender Tyler Blackett. 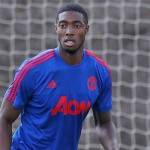 The Parkhead club confirmed the signing of the 21-year-old defender on a season-long loan from Manchester United during the first half of their 3-1 home win over St Johnstone and he was paraded on the pitch at half-time.

On what Blackett, an England Under-21 cap, would bring to the team, the Norwegian boss, said: “Quality, that is the most important thing as I have said many times.

“He is a good player, an up and coming young player. He can play centre-back or left-back so we will see.

“He has experience playing for Manchester United. He really wanted to come to Celtic and we wanted him as well so I think he is going to be a good signing.”