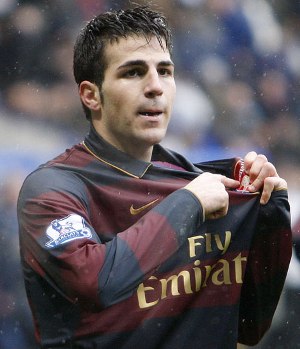 Spain international midfielder, Cesc Fabregas has warned Arsenal will not enter the new Barclays Premier League campaign thinking only of a fourth-placed finish and intends to “improve everything” next season.

The Gunners skipper, now aged 22, has seen another summer filled with rumours of his imminent departure, with AC Milan now emerging as the latest big-name club to target the Spain international.

Fabregas, though, remains as committed to the Arsenal cause as ever.

Even though the squad may have lost Togo striker Emmanuel Adebayor and Ivory Coast defender Kolo Toure to Manchester City, the Gunners skipper has full confidence for the campaign ahead.

Arsenal teenager Jack Wilshere grabbed the headlines with an impressive display at the Emirates Cup last weekend, scoring twice in the 3-0 win over Scottish champions Rangers. The 17-year-old is expected to be called up into the England Under-21s for the friendly against Holland.

Fabregas, who became the youngest player to represent Arsenal in the first team when still aged only 16, believes midfielder Wilshere proves just what talent the Gunners have down through the ranks.